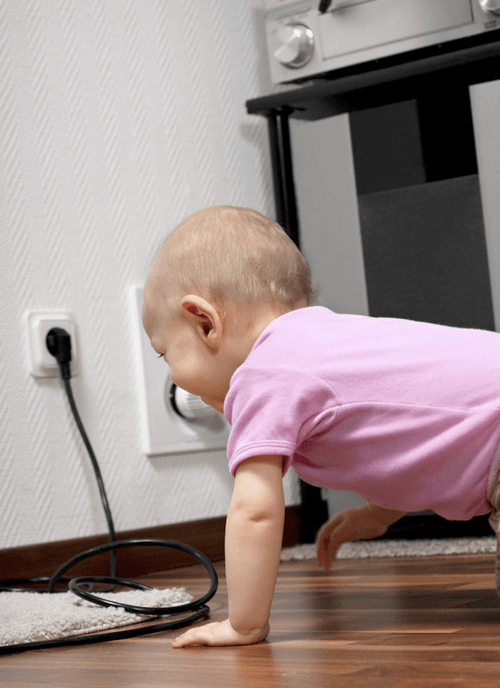 At John's Electric, our goal and mission are to keep you and your family safe while using the great luxury of electricity. Electricity can be dangerous. It can cause electrical shock, electrical burn, electrocution, and fires. As dangerous as it is, it doesn’t have to be. If the electrical wiring and components that make up your electrical system are installed correctly, and to code, then many of these hazards can be eliminated.

Homes that were built before 2008 in Birmingham will have standard receptacles installed. These outlets are dangerous for your children and grandchildren because they can stick metal objects in them and get hurt.

Childproof Electrical Receptacles If you have kids, I’m sure you have seen those little plastic inserts that you install in outlets to keep your kids or your grandkids safe from electrical shock? They are a great invention, but now they have something even better, which is good because let’s face it; children somehow always find the smallest objects on the ground and go straight to the electrical receptacles.

With that said, many parents have unfortunately forgotten to replace the plastic piece and children have been hurt and killed. Did you know in the US alone an average of seven children per day is treated from electrical shock or electrical burn caused by tampering with outlets?

The good news is that someone invented a childproof outlet. These outlets are also known or referred to as tamperproof or tamper resistant receptacles. These outlets have a specially designed piece of plastic built into the receptacle. Think of them as little locked doors. So when a child tries to insert small objects into the slots, they will not be able to. Each slot or door must be pushed in at the same time with the same amount of pressure for each slot. So if it’s not intended to go in, then it will not go in.

By code, homes of today must have tamper resistant receptacles installed. If you have standard receptacles in your home and have small children, then please call John's Electric today so we can help keep your family Safe!

Welcome to the Neighborhood!

John's Electric Service strives to give the best possible service through:

Finish reading Welcome to the Neighborhood!...

Whether the issue is large or small, problems with electricity are often ignored until they become apparent.  It's easy to avoid thinking about problems that can occur in our appliances, circuit breakers, wall outlets, and even light bulbs. But often, ignoring issues while they are small leads to more significant problems and the necessity for the help of an electrician.

Aubrey upgraded our electrical fuse panel, put in an updated outside service panel, replaced the main service line from the outside panel to the inside fuse box, and installed several outlets. His original estimate was complete and accurate. He brought our electrical system up to code and made several recommendations for changes and upgrades that we had not thought of. He worked with our schedule, was on time and very professional, and left our home as clean as when he arrived. He was extremely conscientious and reliable. We very highly recommend John's Electric and will definitely use them again.

When you need help from an electrician IMMEDDIATELY, this is the company to call. They came out right away, gave me several options for the repair, and the pricing was fair. I can tell you this, if I had another electrical problem this is the company that I would call.

Aubrey did a great job for us today. He is an asset to your company!

Aubrey was very helpful, explaining things as he went and making sure that everything worked good before he left.