How To Read Your Alabama Power Meter. 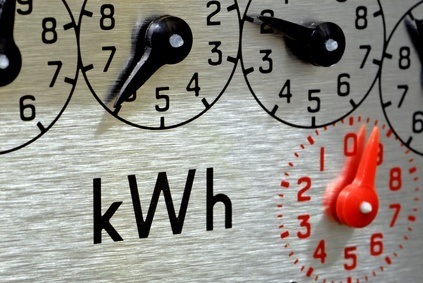 Learning to read your power meter can mean the difference between blindly paying what the electric company says you owe and knowing where to find their mistakes. The task may seem daunting at first, but with a few basic steps, it will begin to just come naturally.

So first, it’s important to understand how the electric company measures your power usage. The measurement used to determine how much power is transmitted is called a kilowatt hour (kWh for short). If the energy is being transmitted or used at a constant rate (power) over a period of time, the total energy in kilowatt-hours is the product of the power in kilowatts and the time in hours.

Electrical energy is sold in kilowatt-hours; cost of running equipment is the product of power in kilowatts multiplied by running time in hours and price per kilowatt-hour. The unit price of electricity may depend upon the rate of consumption and the time of day. Industrial users may also have extra charges according to their peak usage and the power factor.

These kilowatt hours run consecutively on your Alabama power meter. Your meter will continue reading until it gets to 99999 and then turns over to zero. Each month the power company will take a reading and subtract last month's reading from the current one. This determines how many kilowatts you used in one month. One month from now the power company will take another reading and subtract this month’s reading from that. For instance, if your meter now reads 53302 and reads 54002 next month, you will be billed for 700 kWh.

There are three kinds of meters. Digital, electronic and dial meters. A digital meter will have 5 black numbers displayed, and usually a number in red (which you will ignore). To read the digital meter, write down the numbers in order from left to right. This is the number of kWh used and this is what you’ll use to compare next month’s power bill to your own readings using the math we described above.

With an electronic meter, look for a cycle display button which will display the total number of kWh used. If your meter doesn’t have one, then look for your reading on the automatic scroll of various displays. Like with the digital meter, write down the 5 black numbers from left to right (ignoring any surrounding numbers) to get your reading.

Finally, the dial meters are a little more complex. These are the “old fashioned meters” with several dials of numbers resembling small clocks. To get your readings from a dial meter, read each dial from left to right. If the pointer is between two numbers, always take the lower number. If the pointer is directly on top of a number, take the exact number. If the pointer falls between 9 and 0, write down 9 and reduce the reading you've already taken for the dial on it's left by one. For example, if you originally recorded 5, reduce it to 4. Don’t read the number on the last dial.

For more electrical tips and services contact the experts at John's Electric.

They always are so polite and come whenever I need them to - working around my schedule. A family business that cares about the little man! Great prices and excellent service! Have used them several times and will continue too!

Had part of a circuit series of outlets/lights stop working while running vacuum. Was very pleased with service.... courteous....professional....good blend of knowledge and interaction.

Aubrey was courteous, prompt and helpful. He knew what I needed quickly. I will be calling him the next time I need electrical service. Gave me a great price.

Very professional & courteous! Aubrey let me know when he was on his way - great communication & reasonably priced.

John's Electric was wonderful! I called and he was at my house within an hour!! I was at great risk of fire because of my breaker overheating, and he got me taken care of quickly, and affordably! I have a home warranty, that wouldn't cover my issue, and he jumped in and took care of me. If I ever had need again, I know who to call. Couldn't recommend John's any higher!!!